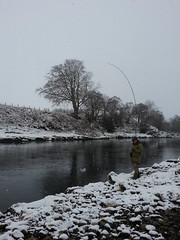 Rod bent for the first time in 2015, but I have to say it was a kelt when fishing the Carron on January the 13th. 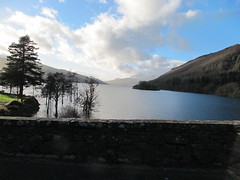 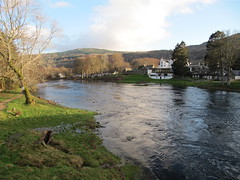 Well down the Helmsdale and Andy Sutherland for producing the first highland fish for 2015, and what a cracker it was, all of 18Lbs and looks spanking fresh from the photos I’ve seen; As far as I know, no other river has produced a fish in January, I would happily be corrected on that but I certainly have not heard of any other. I think the Kyle of Sutherland Rivers were blank. Mike and I fished the Carron on the second day of the season, but only a few kelts in the snow flurry’s made for a pleasant day. The following day we fished the Oykel but no results, but a lovely sunny day after a frosty start in the morning. 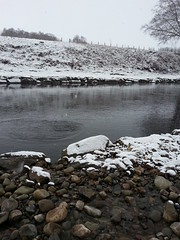 The bigger rivers down country are coming into play now albeit a bit slowly, but I see on “Fish Scotland” that the Junction/Tweed had 10 on Monday which sounds encouraging.

We are experiencing a bit of arctic weather up in the highlands at the moment, nothing serious but a bit more that experienced in recent years; hopefully when the thaw comes fish will arrive along with the Oyster catchers sometime this month. The Tail of the Whirlpool on Lower Oykel. January 2015.

One of my favourite charities is “Canine Partners” Irene has been busy making cushions with a view to raising some money for such a good cause; We do not have many, so to secure your purchase on a first come first serve basis, send an email to reserve yours  now. Then I will ask you to send a cheque for £19.90. 75% of which Canine Partners will receive;  + P&P. Please do not send money at this stage. 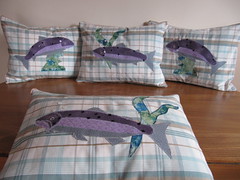 The Salmon Cushions are all different. 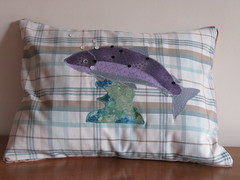 Thank you for supporting such a worthy cause.

I am free for tuition to any one requiring help on the week commencing Monday the 30th of March; not only that I am in the unique and rare position of having been offered a 3 rod beat on the Lower Oykel; This is an opportunity that has been sought after for years by many people, so now is your chance.

Just email or give me a call for a chance in a lifetime to fish a river of worldwide fame. 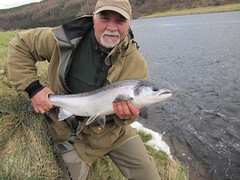 Kim Sawyer with an Oykel Springer.

This entry was posted on Sunday, February 8th, 2015 at 5:30 pm and is filed under The river bank news. You can follow any responses to this entry through the RSS 2.0 feed. You can leave a response, or trackback from your own site.