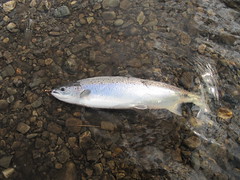 On the 19th of February 1965, the late Peter Campbell took the first fish of the season from Langwell pool; in those days Langwell pool would account for approximately twice as many fish as any other pool throughout the season. It wasn’t just a better pool, it was a lot better, and off course everyone wanted to go there in preference to any other pool. With only two rods to a beat it meant that the Brae and Whirl pool had to do with a token cast or two after lunch, then it was back to Langwell until the end of play.

On the 5th of October 1978 soon after the SEPA gauge was installed, the Oykel experienced the biggest flood recorded in living memory, some 4.144 M on the SEPA gauge. To my mind Langwell pool never did fish as well again and so it would appear that the pool changed in some way, albeit not noticeably to the human eye, but I do believe the fish thought different! And have done so ever since. The other noticeable habit that salmon have from year to year is that, at the beginning of a season I used to see a pattern forming of the popular taking lies in some of the pools, and throughout the season you could rely on those lies to produce more frequently than others; but the next season might not be the same! One of the many mysteries that makes the Atlantic Salmon so precious.

The good news is that the Kyle of Sutherland Rivers are now producing fish, albeit in small numbers. Langwell pool on the Oykel produced an 18 pounder. Further north the Helmsdale seems to be doing somewhat better than most, which is not unusual. Let’s hope this is the start of a really good spring fishing which is long overdue.

Unfortunately for the Spate Rivers, high pressure has set in, and looks as though it will be in control for the coming week at least.   That been said I have had great sport backing up in the spring time with an east wind!!!!!!!! 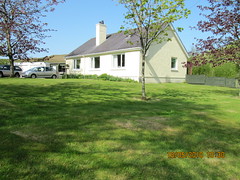 This entry was posted on Tuesday, March 17th, 2015 at 1:14 pm and is filed under The river bank news. You can follow any responses to this entry through the RSS 2.0 feed. You can leave a response, or trackback from your own site.