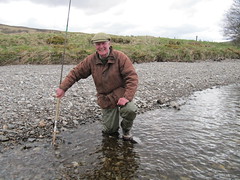 Peter Lyster releases another one to the Juction pool on the Lower Oykel. 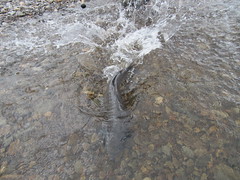 This is a good release; the fish has not been netted, nor touched by human hands. Then swims away at speed and no need for help to survive. This is most important for the fish if they are to enjoy life after been caught by an angler.

Its seems to me like a long time since the spring fishing began back in January/February, possibly because of the poor catches recorded earlier, this always seems to make the season drag particularly when conditions were excellent like this year. Now we are into June and still getting spring like conditions up North, with fresh snow recorded on the Monroe’s just recently.  And fresh fish are still coming in. 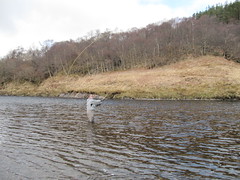 Peter Macdonald forming a good D loop on his second day. Langwell pool on the Lower Oykel in March 2015. 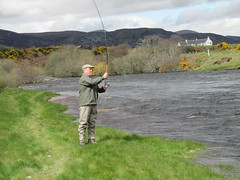 Alec Pickering on his first morning. High water on the Madman pool – Lower Brora. May 2015. 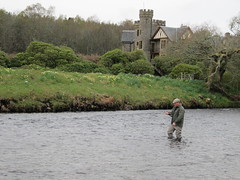 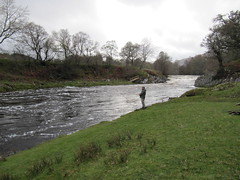 Alec took his first fish on the Morail pool of the Braelangwell beat on the Carron.

How is it , I have often wondered, that The clever Atlantic Salmon can arrange to come in abundance and make themselves available to suit the correct weather conditions , just as though they have some way of programming themselves from birth so as they mature and get there run timing to coincide with the appropriate weather. I have often made the comment, that, salmon are better” barometers than barometers”. Capt David Bailey with a 9 pounder from Brae Burn,Lower Oykel. 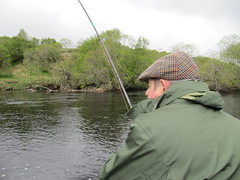 Undoubtedly throughout Scotland May was the month that saved the reputation for spring salmon; in the highlands some rivers have had the best runs for several years, not only in abundance but the average weight must be significantly better when many fish in excess of 20 pounds will have been recorded; I believe the river Conon produced one of 30 pounds which is very commendable by any standard.

To my mind it is of some comfort that the Springer’s, albeit late in arriving, may have found a niche in the new climate change that suits them, and hopefully will enable them in future years to return to their former run timing earlier in the season.

This entry was posted on Thursday, June 11th, 2015 at 10:36 pm and is filed under The river bank news. You can follow any responses to this entry through the RSS 2.0 feed. You can leave a response, or trackback from your own site.