You are here: Home/Blog article: End of Season 2015 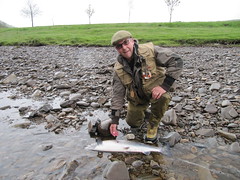 John Lay lands his first one, a 10 pounder from Upper Sgolbach on the Lower Oykel. 10th of June. 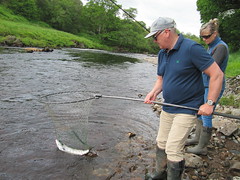 Andrew Jones just about to release his first fish which he took in the Washer Woman, on Braelangwell beat for the Carron. a nice 4 pound Grilse. 30th June.

I think there can be little doubt when it comes to survival, the Atlantic salmon has sophistication and capabilities away beyond the knowledge of anyone; however much I may think I know about the salmon, to me it seems a fact, that in reality it is less I know!   The recovery of fish stocks to our rivers this year has been most welcome and hopefully the trend will now continue into the future, particularly the spring run. That been said one sunny day does not make a summer. Personally I doubt very much if anything we have done has contributed to the increase of fish this year, I do believe the vastness of the salmon’s complexities is far and away beyond the scope of anything we can do to help, however much we may try, and of course everyone has done so, all in good faith.

As far as I am concerned the quality of sport has been good, and therefore a very satisfactory year for tuition, and angler’s catching their first fish, which is of course is very rewarding; Photo’s illustrate the success of some of my clients this season. 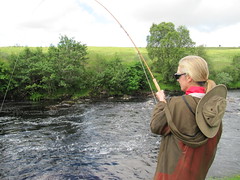 Nicola Herring into her first fish within 5 minutes of starting on Monday morning. 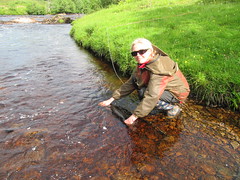 Nicola returning her first one to Todd Hunters on the Upper Oykel. 12 pounds. Great way to start the week.

Apart from the early spring period, up until the end of July conditions were excellent throughout the Highlands and indeed most of Scotland has had a good season, undoubtedly enhanced by the continuous rainfall which was welcomed by all anglers, but many others may not have been so grateful for the relentless amount of precipitation throughout the summer. 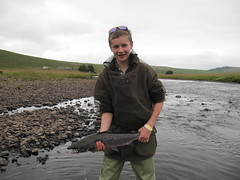 James Costain with his first fish from the Shingles on the Upper Oykel. 5 pounds 18th August. 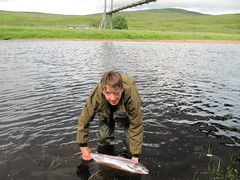 Edward Herring returning his second salmon after taking his first earlier in the day. 8 pounds Caplich on the Upper Oykel 11th July.

As most rivers closed on the 30th of September the catches are showing a great increase on last year, certainly the Kyle of Sutherland rivers have done very well, particularly the lower beats, but not so much on the upper beats, which seems to be a phenomenon on a number of rivers, for whatever reason it may be! However the really good news is that rivers are well stocked with Salmon/Grilse and Sea-Trout; numerous fish of over 20 pounds have been taken on the Highland rivers, not to mention the larger rivers down country.

Unfortunately by mid September the rivers up north got down to the lowest level of the season, which was shown clearly by the relatively small numbers of fish taken, and indeed as I write, it is only now that the weather is beginning to break and as can be seen from the SEPA recording sites, water levels have increased quite substantially. Undoubtedly spawning will soon be under way and the small tributaries should now be well replenished with water so as to get fish to the extremities of the catchments which is all part of the important habitat, as well as the main system. 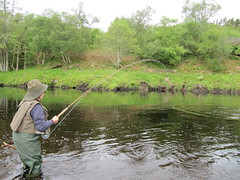 The Oykel 11″-6″ has been a great success and the most popular of the Oykel range.  Delivery at least 6 weeks from order date, so you should order now for next year

The Environment Minister, Aileen Macleod, has intimated that fishery districts are to be categorised according to their salmon’s conservation status and a charging scheme will no longer be pursued.

I must say the thought of having to pay for a tag to attach to your own fish that has cost a considerable amount of money in the first place to catch, has come as a welcome bit of news to me and I would imagine to many anglers who help enormously to support our industry. It will be interesting to see how third category rivers manage with mandatory C&L.

In the Tweed news I have just seen a most interesting and informative presentation by Dr Ronald Campbell (Biologist) albeit, his findings are relevant to the Tweed, but I see no reason why they should not be relevant to other rivers, and very much substantiate my own current and former beliefs on the validity of catch and release as a conservation tool. Well worth a look if you have not already done so.

This entry was posted on Sunday, November 1st, 2015 at 1:18 pm and is filed under The river bank news. You can follow any responses to this entry through the RSS 2.0 feed. You can leave a response, or trackback from your own site.