You are here: Home/Blog article: Season 2017 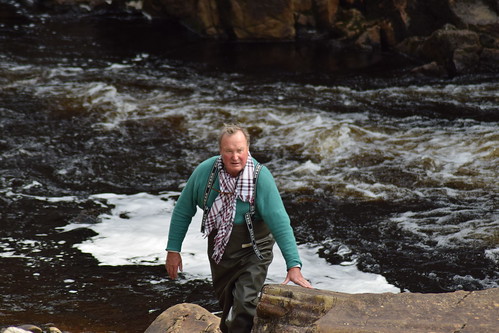 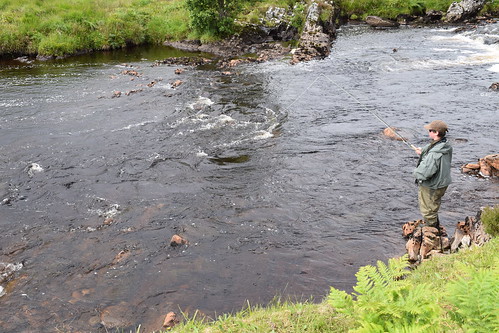 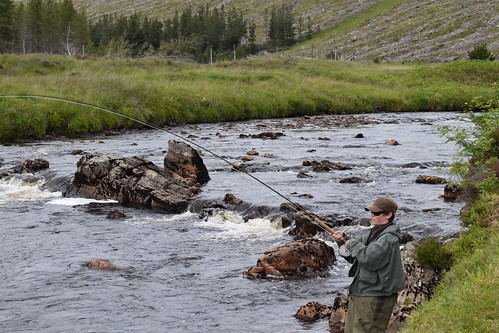 Well done Patrick, your into him. 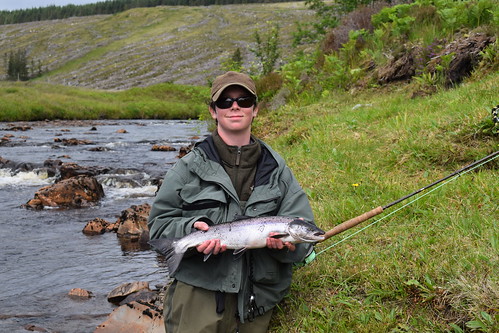 Patrick Norman with his first of many from the Upper Oykel. 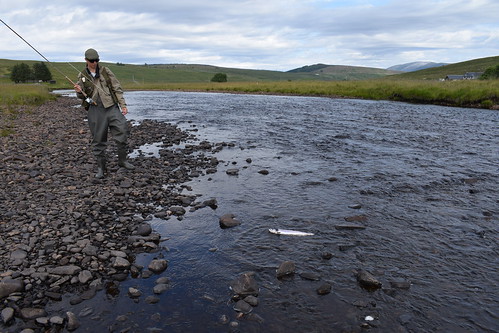 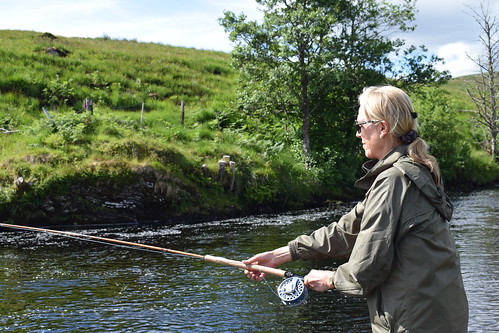 Nicola Herring having a cast in the Camus, Upper Oykel. 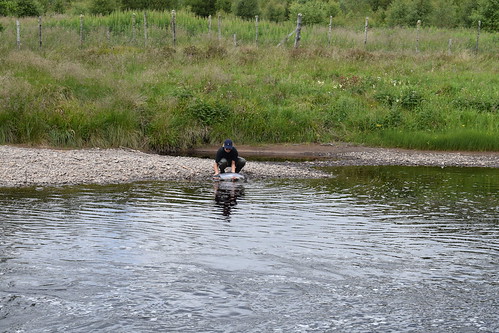 I was fortunate enough to catch a couple of springer’s in April, it is interesting in a way how easy it is to forget just how sporting and lively the spring fish are, compared to later running fish, especially when the water temp soars into the sixties by the middle of summer making fish rather lethargic. 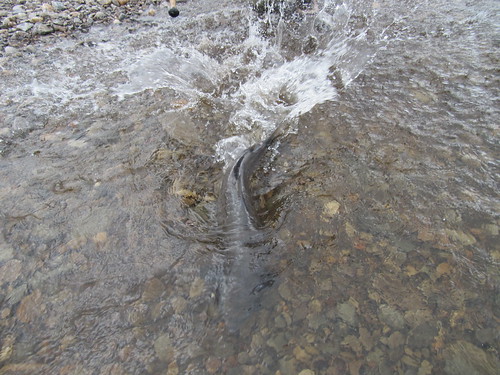 A springer making a good return.

It would appear that conditions for spring fishing were pretty good in the Highlands up until the month of May, when someone pulled the plug on most rivers; my late good friend Barry Oldham accused me of doing just that on many occasions when he was just about due to come fishing the Oykel!

However, before the plug was pulled, I think there were signs that the springer’s were a bit more plentiful than in former recent years, if so, let’s hope the trend continues. as we all know there is no substitute for a springer.

On reading Steven Mackenzie’s excellent Oykel News 2017 it would appear that the Oykel had good water conditions apart from May when high pressure took over.  It would also appear that there was a good many fish running the system for most of the season, certainly for the weeks I was on the Oykel there was no shortage of fish to be seen, catching was the problem which prevailed throughout Scotland as far as one can tell.

However, one lady didn’t suffer too much from not catching when she landed a 26 pounder in the Upper Farm on the Lower Oykel, possibly a record.  The Lower Oykel produced a respectable total for the season of 746 Salmon/Grilse, 96% of which were returned.

I note with pleasure that the Langwell pool was top pool once again, in my younger days it was top pool with tens of fish more than any other pool, year in and year out, and with as many as 24 fish taken in a day. 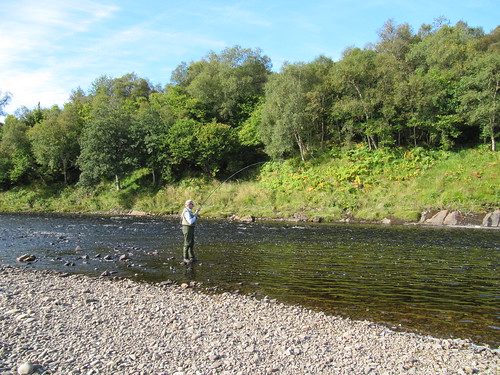 The head of Langwell pool on the Lower Oykel can still be deadly, even in relatively low water.

Allegedly, UDN reared its ugly head once again in a number of rivers throughout Scotland; there is nothing that saps my confidence more, than to see fish behaving as though they have the symptoms of this horrible disease, “which is still not fully understood if at all”.  I was fortunate, or whichever the case may be, to have worked and experienced eight years’ worth without UDN in the Oykel before it arrived in 1968, to that end I feel qualified to make some comment on the effect it has had on the angling potential since its arrival.  It would take a chapter in a book, not a few lines in my blog to give the subject a fair hearing.  In brief, I believe the taking habits of our Salmon have been seriously compromised by the advent of UDN, and as a consequence over the year’s catches may have been reduced significantly.  In my younger days we used to make comment that it was nature’s way of preserving the stocks!  “maybe”. 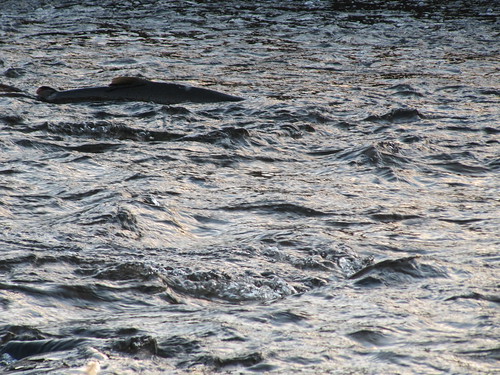 A cock fish with his back out of the water at spawning time, the hen will not be far away!

As well as the angling season over for most rivers, the spawning will now be completed also, hopefully with good results to follow, certainly there was more than enough water to get fish to all extremities of the catchments and so give maximum potential for spawners. 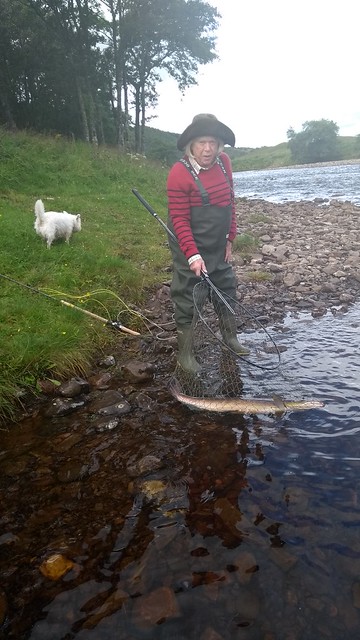 Mrs Cooper with a 15 pounder from the Long pool, Lower Oykel. 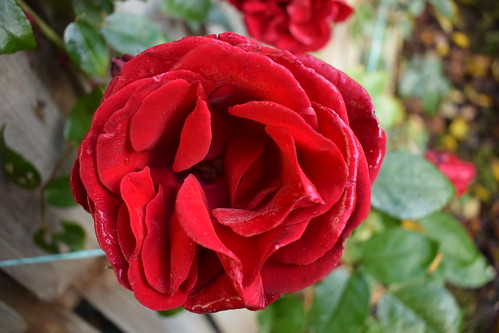 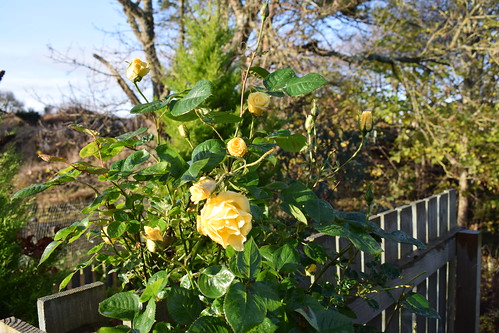 Why have I roses in bloom in December?. 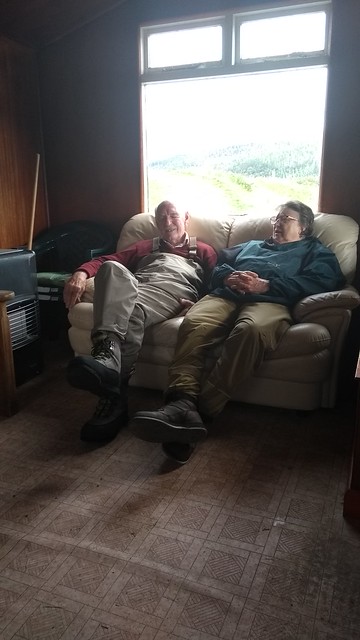 The end of a hard day! 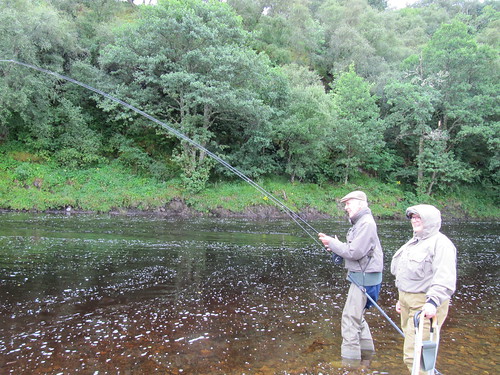 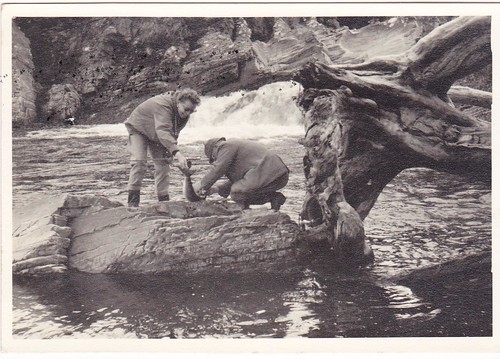 A fish successfully landed on the Perch below the Einig Falls in the 1950’s. 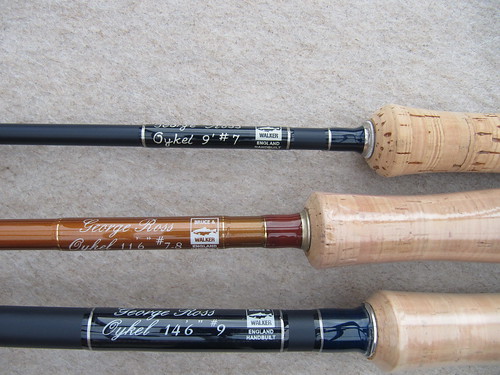 My Oykel range of rods made by Bruce & Walker have been popular and very effective for the job required, distance, delivery and delicacy.

My sincere gratitude and thanks to all who supported Oykel Salmon Flies & Tackle this year and I very much look  forward to the 2018 season with you.

Tight lines and a Very Merry Christmas to all.

This entry was posted on Friday, December 1st, 2017 at 7:22 pm and is filed under The river bank news. You can follow any responses to this entry through the RSS 2.0 feed. You can leave a response, or trackback from your own site.